10% off tickets for Come Fly Away

Les Grands Ballets Canadiens de Montréal gives Canadian choreographer Peter Quanz the chance to realize his long-cherished hope to create a full-length work about the torrid romance between Auguste Rodin and Camille Claudel, portraying the intimate lives of the two artists and their shared passion for sculpture. "I believe that their relationship intensified the emotional content of their sculpture," he explains. "Camille Claudel was a tragic figure, a victim of her time and of the men who were closest to her. This is a story of passion, love and betrayal."

A native of Baden, near Kitchener, Ontario, Peter Quanz is one of Canada's most in-demand choreographers. A recipient of the 2005 Clifford E. Lee Award, Canada's national award for young choreographers, he became the first Canadian to receive a commission from the legendary Kirov Ballet (Mariinsky Theatre, Russia) in 2007. Three years later, he launched his own company, Q Dance. He has created some thirty works for the world’s leading ballet companies, including The National Ballet of Canada, American Ballet Theatre, the Royal Ballet (Linbury Theatre), the National Ballet of Cuba, Hong Kong Ballet, Royal Winnipeg Ballet and Pennsylvania Ballet. He is known for the finesse and precision of his gestural vocabulary, the originality of his combinations, his mastery of choreographic composition and ability to hold audiences spellbound.

Please let me know if you are tempted by a trip to beautiful Montreal!
Posted by Katherine Barber, Tours en l'air at 4:24 PM No comments:

It's time for you to put in your two cents worth and help me to choose the trips that will be Tours en l'air in 2011-12. Below is a list of all the trips I think are doable and interesting. Remember, you don't have to live in Toronto to join these trips, as you find your own way to wherever they start. Please let me know which ones you may be interested in. It isn't a commitment, it's just a way for me to eliminate the trips for which there is insufficient demand before I go ahead and do the detailed planning. If you think you might want to go on any of these trips it is best to tell me now, even if later you may have to decline, because otherwise I'll assume there is a lack of interest and will abandon any further planning. It's also your chance to ask for tweaks to the proposed schedules, for instance if you want it a bit longer or shorter, aren't interested in one of the ballets in the schedule, etc. I do need your input as soon as possible as some of the opera houses require that I put in my requests for tickets as early as June 1st this year. Here you go, your "balletomane in a candy store" moment: 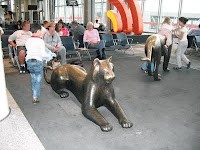 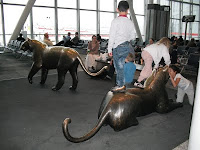 Since I spend a lot of time at the international departures wing of Toronto's Pearson International Airport, I am always happy to see these cougars, which provide wonderful play space for children and fun for the rest of us.
Posted by Katherine Barber, Tours en l'air at 9:49 AM No comments: 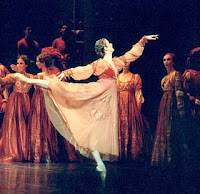 Nureyev. Ek. Forsythe. Van Manen. Quite the survey of some of the big names in contemporary ballet. That's what a group of 12 of us enjoyed on Tours en l'air's recent trip to Paris, Antwerp, and Holland. In addition, we did perhaps indulge in the occasional waffle, chocolate, and cherry beer, and saw some beautiful sights.
Kicking off the trip was a performance at the Opera Bastille in Paris of Nureyev's version of Romeo and Juliet. Since the entire group came from Toronto, where the National Ballet of Canada has been performing Cranko's romantic version for the past 40 years, this much darker and more violent vision was quite a change. We all loved the beautiful costumes and stunning sets by Ezio Frigerio, which we could really appreciate from our fantastic fourth-row centre seats (which we valued all the more when we heard that all R&J performances had sold out within two hours of tickets going on sale).


Jury is out on Nureyev's choreography, which some of us found unmusical and awkward, jumpy when it should be lyrical. Another objection was that the first two pas de deux, instead of being real pas de deux, were more like two individuals dancing side by side. Nonetheless, especially since the NBOC will be premiering a brand new version of R&J in the fall by Alexei Ratmansky, it was an interesting experience to see how the music and story can be interpreted differently. Particularly effective is the scene where Mercutio's friends are convinced his death throes are a joke until well after he has died. Another feature I liked was having Juliet rather than Lady Capulet mourn over Tybalt's death, as I have always found the Cranko version rather histrionic. On the whole though, I still love Cranko best! Our cast was Karl Paquette and Isabelle Ciaravolla. While performing manfully, Paquette did look in the more difficult parts as if he was concentrating on the acknowledged difficulties of the choreography rather than staying in character. A dancer who caught my eye was Fabien Revillion as Benvolio, a larger role than in other versions; his jumps and ebullience were impressive. You can see him here (though the person shooting the video seems more interested in the ballerina!)

Posted by Katherine Barber, Tours en l'air at 9:19 AM No comments: